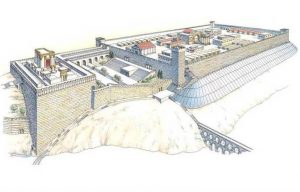 What would the final movements of Jesus look like if Herod’s Temple was actually located in the ancient City of David over the Gihon Spring, as proposed by Dr. Ernest Martin? How would His movements from arrest at the Garden of Gethsemane to crucifixion and burial on the Mount of Olives be different than tradition would have us believe?

I am presenting the following two figures from the ASK Timeline Project of Henry Dye and Tim Parrott (2015–2016) and the Associates for Scriptural Research (ASK) at www.askelm.com. These figures represent what Dye and Parrott believe the final movements of Jesus would look like, based upon the details available from Dr. Martin’s books and associated research materials. I am generally in agreement with these diagrams. 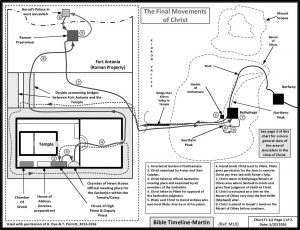 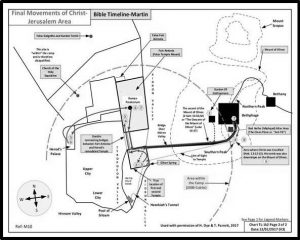 As part of the ASK Timeline Project, Dye and Parrott also produced a remarkably detailed biblical chronology of various aspects of Jesus’ birth and death, according to Dr. Martin’s chronology. Much of this chronology from Dr. Martin is presented in my earlier Posts under the topic ‘When Were Jesus’ Death, Resurrections, and Ascenscions?’ However, whereas Dye and Parrott assume a Thursday crucifixion in AD 30, the case presented in my various Posts is for a crucifixion on a Wednesday in AD 30.

In the above figures, Dye and Parrott properly show the site of the crucifixion of Jesus being on the Mount of Olives, near the southern peak of the Olivet ridge, east of Herod’s Temple, and outside the ‘Camp of Israel.’ The ‘Camp of Israel’ extended 2000 cubits from the threshold of the Holy of Holies in the Temple. Dr. Martin provides further explanation of the ‘Camp of Israel’ in his book, The Temples That Jerusalem Forgot:

The Jewish authorities in the first century chose the figure of 2000 cubits (3000 feet) because of the reference to the 2000 cubits mentioned in Joshua 3:4 that separated the Israelites from the Ark of the Covenant. The accounts in the earliest parts of the Talmuds known as the Mishnah show the use of these 2000 cubits in early Jewish interpretation (Rosh ha-Shanah 2:5, see also Sanhedrin 1:5 and Shebu’oth 2:2 for the authority of the Sanhedrin [the Supreme Court] of the Jews to set the limits of the three camps). As in the case of the Ark in the time of Joshua, the distance was determined “by measure” (Joshua 3:4). This was by walking the distance with a red or a line [a measuring rod] in the hand. The distance was determined by walking, not by measuring the distance of 2000 cubits from the Holy of Holies as a bird would fly.

Whereas it was common for Jewish towns outside of Jerusalem to have their Sabbath day zones for walking at 2000 cubits from the walls of the various towns, in Jerusalem it was different because that is where the Temple (God’s House) was situated. Since the Holy of Holies in the Temple was designed to contain the Ark of the Covenant and the 2000 cubits were originally reckoned from the Ark in the time of Joshua, the 2000 cubits for the limits of the Camp of Israel (the third camp) were measured in Jerusalem from the threshold of the Holy of Holies. This was considered to be the entrance to the abode of God on earth. This agreed with the 2000 cubits’ distance between the Israelites and the Ark in the time of Joshua (Joshua 3:4).

Note that the 2000 cubits limit of the ‘Camp of Israel’ was measured along the ground and not as a bird would fly. Due to elevation changes from the Temple to the Mount of Olives – both up and down – this 2000 cubits would display on a flat map as something less than 2000 cubits. Accordingly, I believe that the limit of the ‘Camp of Israel’ would be displayed at a distance somewhat less than that shown on the second of the above figures.  As a result, the crucifixion site could have been closer to the Temple than what is depicted.

Please note also that the image of the crucifixion site included in my Post, Temple Graphic, depicts the site as being on the ‘Southern Spur’ of the Olivet ridge, at a distance of something less than 2000 cubits from the threshold of the Holy of Holies. The crucifixion site depicted in the above figures is probably a more accurate depiction.

Note: Throughout my case to determine Where Was Herod’s Temple?, one question has remained unanswered: How could the Jewish Rabbis through the centuries have forgotten where their own Temple was located?  In my next Post I will provide some insights into this very intriguing question.