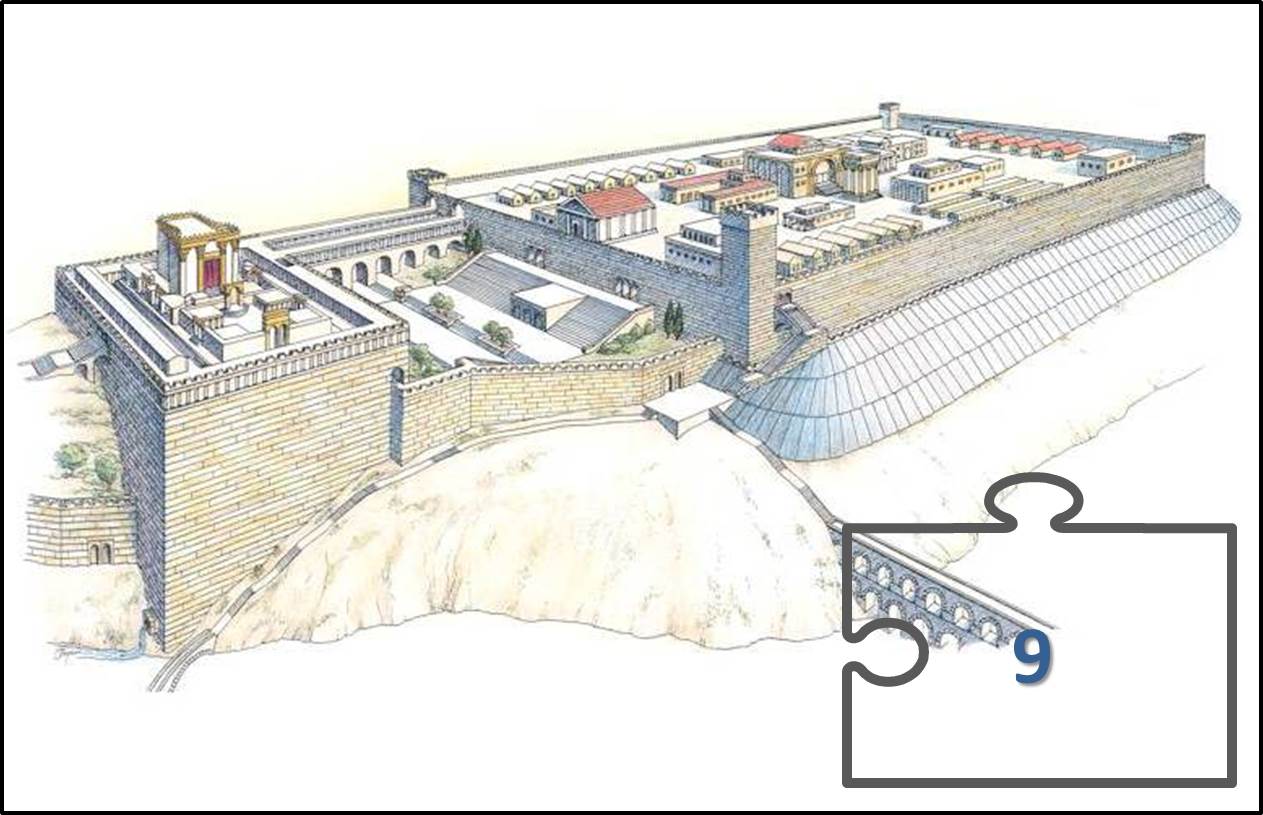 The ninth and final puzzle piece in the topic Where Was Herod’s Temple? presents the case argued by Nancy Kuehl, who maintains that the traditional “Temple Mount” is the true location of the Temple, but that the walls of the Temple remained standing not in spite of the prophesy of Jesus, but because of that prophesy.

It is highly unlikely that you have ever heard this argument before!

Nancy Kuehl is the author of the noteworthy book, A Book of Evidence – The Trials and Execution of Jesus (2013), which I used extensively in my various Posts under the topic How Did Jesus Really Die?

In the Foreword of Kuehl’s book is the following explanation about her research interests:

“The author . . . is among a growing number of people who are seeking to better know Jesus in the context of his Jewish roots. Ms. Kuehl has chosen to use the laws of both the Jews and Romans as the tool with which to diligently search and dig through to the light . . . to glean for ourselves a more authentic look at Jesus.”

As outlined in her book, Kuehl’s case is that the ancient Jewish Temple was, indeed, located on the traditional “Temple Mount.” However, it is her position that what Jesus was referring to when he spoke to his disciples during an exchange on the Mount of Olives were the administrative buildings [oikos] of the Temple, which were situated on the Mount of Olives.  These buildings were considered by Jews to be part of the Temple complex. And – in keeping with the prophecy of Jesus – these buildings were, in fact, completely destroyed by the Romans in AD 70.

Kuehl makes her case for this alternative “Temple” by referring to the words of Jesus in Matthew 24:1:

“Jesus left the temple and was walking away when his disciples came up to him to call his attention to its buildings. ‘Do you see all these things?’ he asked. ‘I tell you the truth, not one stone here will be left on another; every one will be thrown down.” (Matthew 24:1–2, NIV).

I am including an extract from Kuehl’s book in this Post – which I believe is appropriate – because Kuehl’s argument offers a possible explanation for Jesus’ prophecy (Luke 19:43–44 and Luke 21:5–6) regarding how the destruction of the “Temple” might have been fulfilled, while at the same time the walls of the traditional “Temple Mount” remained standing.

In Chapter 5 of her book, Beth Pagi: The Place of the Crux, Kuehl introduces her case and provides some insights into her extensive research. Interested readers will want to read her entire book, as it contains many unique insights into Jewish and Roman law and the conditions which existed at the time of Jesus’ death.

Here is a section quoted from Kuehl’s book:

“During the first century there was an ecclesiastical district on the Mount of Olives called Beth Pagi, where Jesus was put to death. It is the same site where Stephen and James the Just were later stoned. This important ecclesiastical district has been designated by many names in Scripture and in Jewish writings. The area included portions of the two central mountains in the Olivet chain. It has been called, as is customary in Hebrew practice, by a variety of appellations: Beth Pagi, Beth Hini, Beth Hanuyoth, the Fountain, the Plaza, the Outer Court, the Spine, the Ridge, the Corner, the Wall, and most importantly, Golgotha. Sometimes, it is referred to in Jewish writings by the governmental departments located there; for example, Beth HaKana (the “Market”) or Beth HaSephar. It is also called the Footstool of HaShem. In the Talmud it is most often referred to as Beth Pagi, and in the Copper Scroll it is symbolically called Secacah and Beth Kerem (House of the spine).

“This important site was, in fact, the most important ecclesiastical district for the City of Jerusalem. It is at this site that the armies of Israel had been mustered, where lepers had gathered, where merchants sold their wares, where the New Moon was determined, and where the judicial Sanhedrin met for criminal adjudication. It was important during the first century because it was the seat of the Temple Cult and the headquarters for the government of Israel.

“When Jesus and his disciples sat “opposite the temple” (hieron – temple precincts), it was the buildings at this governmental site to which he referred (Matt. 24). This “branch” of the Temple extended from the Hill of Ophel on the west to the eastern extremity of the village of Bethphage. That village derived its name from the district of Beth Pagi (Place of Meeting) in which it sat. The region is sometimes referred to as the Beth Galeel (House of the Circle) or the Beth Din (House of Judgment). It was also the place of public execution. Note the wording of the New Covenant reference:

“Herod’s Temple was a singular structure located upon the southern end of the present Temple platform. It was not the Herodian Temple sanctuary [naos] to which the disciples were referring but to the “buildings (oikos) of the temple” situated on the Mount of Olives. Mark 13:3 states that “he [Jesus] sat upon the Mount of Olives over against [opposite] the temple”; but the word for temple here is herion. Strong’s Concordance indicates that it was “a sacred place; i.e., the entire precincts of the Temple” [whereas 3485 (naos) denotes the central sanctuary itself]. The word naos derives from the root naio and literally means “to dwell,” so it was not the usual “dwelling place” of the Shekinah, that is sanctuary, to which Jesus referred, but the place where the Shekinah rested when it left the Temple (Ezekial 11:23).

“It has already been established that the activities performed on the Mount of Olives were of a sacred nature, and that the Mount of Olives, itself, was considered a holy site (b. Ber. 9.5; b. Yom. 68b) primarily because the “glory” of YHWH had last rested there. These buildings, as we shall see, were located in the Plaza of Gulgoleth, perhaps extending as far as the village of Bethphage. The Bordeaux Pilgrim locates the village at one thousand paces (i.e., one thousand yards) southeast of the northern summit of Olivet. Jesus had said that “one stone would not be left upon another,” yet there are many stones and structures left on and near the Temple Mount. This has been adduced by modern archaeological experts.

“He was, however, not speaking of the Herodian Temple Mount at all. Jesus was referring to these other buildings (plural) attached to the Hill of Ophel in the form of a lateral appendage, or a wing that extended from the Woman’s Court (at the Miphkad Gate) east of the Temple at Ophel, over a bridge that covered the Kidron Valley, and over the hill toward the Village of Bethphage [this “wing” should not be confused with the “pinnacle” of the temple; to be sure there is an ecclesiastical “wing” at the site of the pinnacle as well].

“Part of the region of Beth Pagi was sometimes called the topos (as in the gospels), the “plaza.” In the Old Covenant it had been referred to as the “Wall.” Since there are various archaeological ruins attached to the site of the Temple Mount, these could not have been the “buildings” to which Jesus referred. An investigation into the extent of the Temple precincts (the hieron) will show that there is not a single whole stone to suggest that the “wing” or “outer court” (the ecclesiastical district) ever existed at all. It has been leveled to the ground.  The Kidron Valley, which was at one time deep enough to accommodate a structure some six hundred feet in height, is now  filled with centuries of debris. As a matter of fact, Beth Pagi is today a cemetery! Even the once important priestly village of Bethphage has been destroyed.

“Yet historical, Scriptural, and archaeological sources prove that the village and the Plaza at Beth Pagi did exist during the first century, and that these sites were the meeting places for the government and the seat of the criminal courts [beth din] [there is a great difference between the criminal court and the court of the priests]. The Outer Court, traditionally depicted as being situated on the Herodian Temple Mount, was actually on the Mount of Olives. It is here we find the meeting place for the rulers of the government of Israel. They were referred to as “heads” of State.

“. . . Naturally enough, one of the reasons the area became known as Gulgoleth (Golgotha) is because it was the site of meeting for the “Head” of the government yet there are other reasons as well . . .”

Kuehl’s book offers many wonderful insights, one of which is the case for the site of the crucifixion of Jesus being on the Mount of Olives in the area called Beth Pagi, which was where public executions under Jewish law were accomplished. I also support this conclusion. However, I am not convinced by Kuehl’s argument that the ancient Jewish Temples were located on the site of the traditional “Temple Mount.” I leave it to each reader to decide whether Kuehl has offered evidence more compelling than that presented by Dr. Ernest Martin.

Note: In my next Post I will provide some details regarding the final movements of Christ throughout the old city of Jerusalem, taking into account the revised southern location of the Jewish Temples, as proposed by Dr. Ernest Martin.