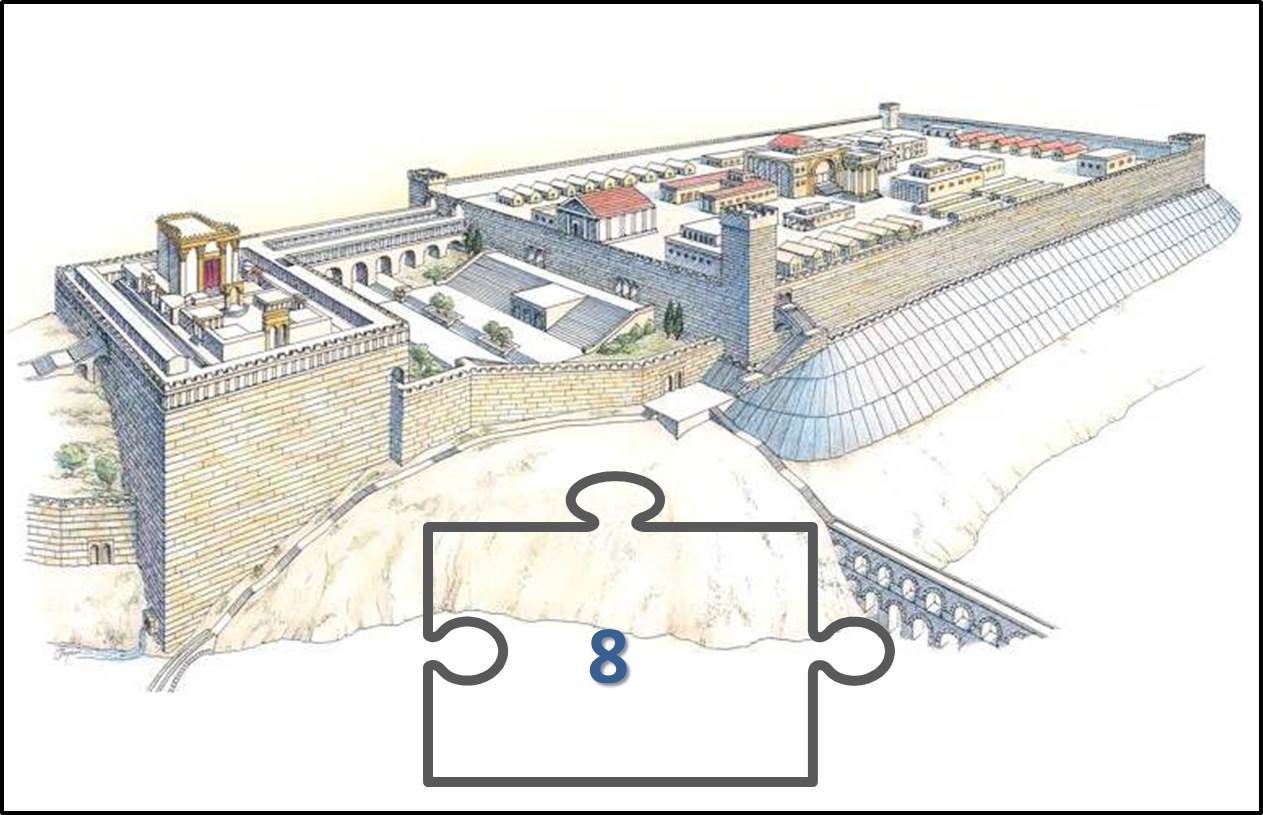 In the eighth puzzle piece of my search for the true location of Herod’s Temple I present evidence for the case presented by Dr. Ernest Martin in Dr. Martin’s own words.  Much of what follows in this Post is excerpted from the article, A Critique by Dr. Leen Ritmeyer, Rebuttal by Dr. Martin (2001).

Dr. Martin – and his case that the Temples of Jerusalem were located over the Gihon Spring south of the traditional “Temple Mount” – is certainly not without critics. If I were to conduct a formal survey, it is extremely likely that Dr. Martin’s critics would be found to include virtually all present-day historians, theologians, Jewish religious leaders, and archaeologists. His critics would also include the usual group of traditionalists who blindly support the currently-celebrated dates and sites related to the birth and death of Jesus in Jerusalem, as well the traditional sites of the “Temple Mount” and Fort Antonia.

One noteworthy critic of Dr. Martin’s proposed locations of the Temple and Fort Antonia is Dr. Leen Ritmeyer, whose impressive credentials as an archaeologist in Jerusalem place him among the elite in his field. Dr. Martin has stated the following about Dr. Ritmeyer:

“He could rightfully be called one of the top representatives of the traditional school of Temple experts that place the Temple within the confines of the Haram esh-Sharif (that all scholars have accepted as true, and this also includes me until I started to look extensively into the subject in 1995).”

Dr. Martin then offers this rather grand opinion:

“It can properly be stated that Dr. Ritmeyer could legitimately be considered a proper and qualified spokesman for all the traditionalists throughout the world who insist that the Temples were located within the precincts of the Haram esh-Sharif. As for me and my research, I am the lone anti-traditionalist who has brought forth the research to prove dogmatically that the world is thoroughly and totally wrong.”

We have available to us on Dr. Martin’s website at Associates for Scriptural Knowledge, www.askelm.com, a very interesting and helpful critique of Dr. Martin’s book by Dr. Leen Ritmeyer, with an accompanying rebuttal by Dr. Martin. This highly colorful exchange provides a “point and counter-point” of many of the key elements of Dr. Martin’s case. The following are excerpts from the critique and rebuttal:

Dr. Leen Ritmeyer began the critique by writing the following:

“In the last few issues of Biblical Archaeology Review (BAR) an advertisement appeared under the heading “Who moved the Temple,” advertising a book called “The Temples that Jerusalem Forgot” by a certain Ernest Martin. Part of the advertisement is a strange drawing, which shows the Temple outside the Temple Mount. Many people have asked me to comment on this and below you will find my critique of this outrageous idea.”

“Leen Ritmeyer in his beginning statement says that my descriptive picture of the Temple and Fort Antonia complex which has appeared in BAR for the past two years is ‘a strange drawing’ based on an ‘outrageous idea.’ This response is because of Ritmeyer’s ignorance or disbelief at what Josephus (the first century Jewish historian) describes about the Temple and Fort Antonia in his writings recorded in his Antiquities and Wars. Josephus, as an eyewitness in 70 A.D., gave an adequate description of how those buildings appeared on the eve of Jerusalem’s destruction by the Romans. All I did was to depict in a drawing what Josephus said about the positions and dimensions of the Temple and Fort Antonia. This drawing that provokes Ritmeyer’s ire is simply a replica of the Temple and Fort Antonia complex as precisely described by Josephus . . . Josephus made some cogent and profound observations that scholars today avoid believing and they normally consider Josephus as an unreliable observer and recorder. This is because what Josephus describes as the Temple and Fort Antonia does NOT fit any part (or in any way) the Haram esh-Sharif that scholars believe today to be the remains of the Temple. The truth is, Josephus as an eyewitness was describing the Temple in a very different manner than that found in the Haram esh-Sharif that Ritmeyer and other scholars accept today . . . Consequently, it is NOT my drawing in BAR that is ‘strange’ and ‘outrageous’ as Ritmeyer states, but it would be Ritmeyer’s Temple (using Josephus’ eyewitness measurements) being located inside the Haram esh-Sharif that would be totally outrageous . . .”

The entire 16 page critique and rebuttal provides an excellent summary of the main points of Dr. Martin’s case. I recommend it highly.

Regarding the location of the Temple on the traditional “Temple Mount,” Dr. Ritmeyer claimed the high ground, but Dr. Martin suggested the following:

“There is not one bit of identifiable archaeological evidence that suggests the Haram esh-Sharif is the Temple Mount. Oh yes, there is a piece of stone that was discovered near the southwest corner of the Haram that says an elevated spot (apparently above its in situ position) was the place for ‘blowing the trumpet.’ To say this refers to the blowing of the Shofar for Temple rituals is pure guessing. In fact, the stone site could equally refer to the place for blowing bugles for denoting time periods and military commands associated with Fort Antonia . . . Listen folks, let us be honest about this matter. There is NOT ONE archaeological item found in or around Jerusalem that denotes without doubt that the Haram is indeed the site of the former Temples. Pure speculation is reigning supreme in this matter. For any archaeologist to say differently is stepping far out of line. It is time that this subjective reasoning of the modern interpreters comes to a halt and that the modern archaeologists return to stating the truth that all the Temples were built over the Gihon Spring as the eyewitness evidence dogmatically states. As I have abundantly pointed out in my book, it is really without doubt that the architectural and geographical evidence supplied to us by Josephus, the Holy Scriptures and other historians show that the Temple square was located over the Gihon Spring.”

Towards the end of the exchange between the two, Dr. Martin made the following observation regarding his research and the case he presented to the world:

“The historical and biblical research I am offering to the world is based on the eyewitness accounts of many people. There can be no doubt that I am right in my conclusions and I will counter effectively any alternative view that supports the present erroneous teaching that the Haram esh-Sharif is the site of the Temples of God in Jerusalem. It is the archaeological evidence that has been misjudged by Ritmeyer and other scholars that is flawed and a lot of wishful thinking. I have not the slightest doubt that my conclusions will be (in the main) accepted by the scholarly world. This will be done simply because they are true.”

The final statements made by Dr. Ritmeyer in his critique were as follows:

“Jan Simons wrote in his scholarly work, ‘It has been said that all authors on ancient Jerusalem, though disagreeing among themselves about every aspect of their subject, are so much at one about a single point that they usually do not even trouble to prove it, viz., the fact that the temple of Solomon and Herod stood on the same middle part of the eastern ridge which is now occupied by Haram esh-Sharif. Indeed, a demonstration of this localization formulated in such general terms might be dispensed with because, at any rate to my knowledge, nobody has ever ventured to suggest another place for it.’ Martin’s ideas fall therefore outside the scope of main stream scholarship regarding the Temple Mount.”

To which Dr. Martin responded with his final rebuttal:

“Ritmeyer is correct in one of his judgments. No one in modern times has suggested that the Temples of God were all located over the Gihon Spring. All scholars and historians since the time of the Crusades (for the past 600 years) and no matter who they are or of what religious persuasion they proclaim, have held steadfastly and religiously to the belief that the Temples were located within the precincts of the Haram esh-Sharif. What I have done with my research is to prove otherwise. And folks, there is not the slightest doubt that I am right. All I can say, in closing, is that the truth will triumph, and triumph soon. When the truth is finally accepted, it will help all parties in the Middle East (and especially those in Jerusalem) to put down their guns and rocks and to turn them into plowshares and into monuments of peace. I hope that day may soon emerge.”

If this exchange between Dr. Ritmeyer and Dr. Martin had been a formal debate, and if I had to pick the “winner,” in my humble opinion Dr. Martin would clearly have won the exchange. It is difficult to refute the eyewitness accounts of reputable historians, when the only alternative is based more on tradition than fact. At the very least, I would submit that Dr. Martin held his own against one of the top names from the traditionalist school of Temple experts – those who place the Temple within the confines of the Haram esh-Sharif.

Note: In my next Post I will present an alternative argument by author Nancy Kuehl, who believes that the traditional “Temple Mount” is actually the correct location of the Jerusalem Temples; but she argues that the details of the Jerusalem destruction foretold by the words of Jesus have been misrepresented through the ages.