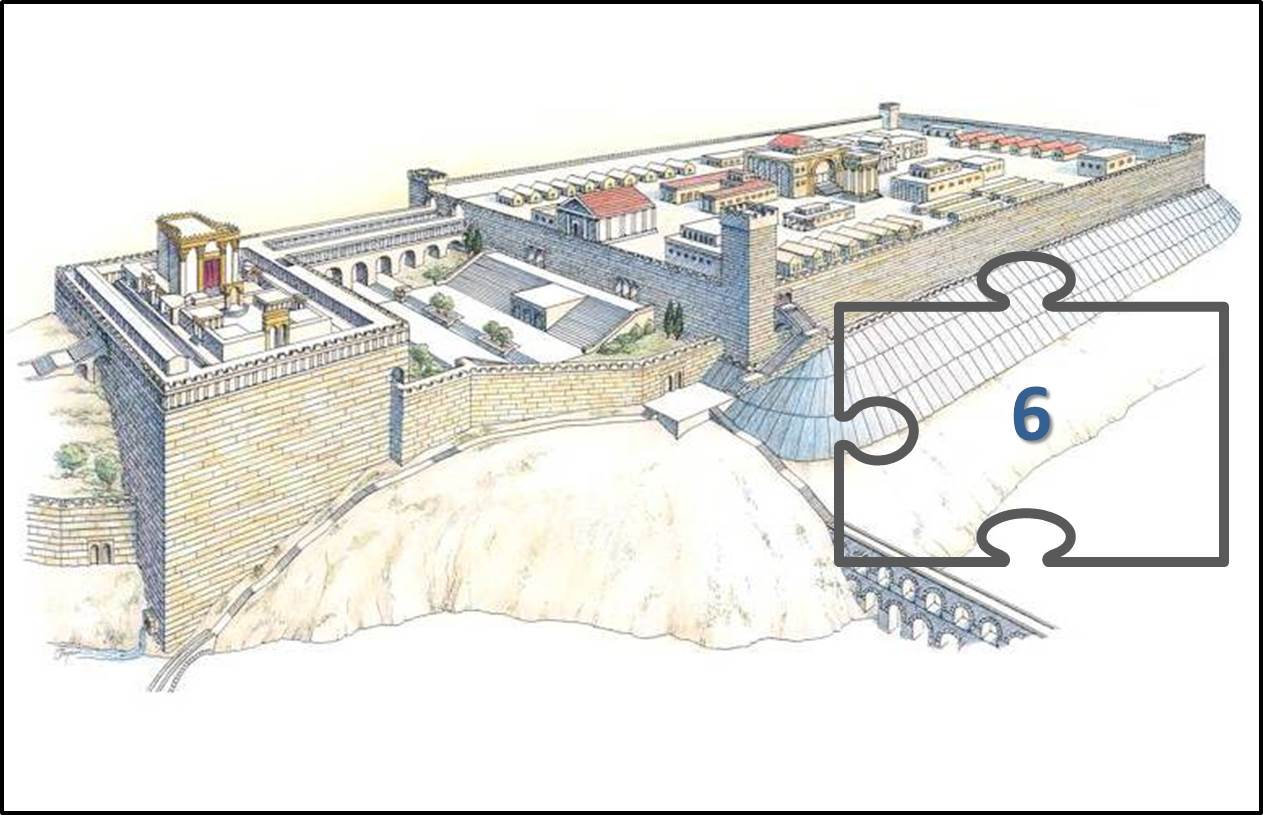 As we evaluate the sixth puzzle piece in our quest to determine the correct location of Herod’s Temple, we will once again be relying on the eyewitness testimony of Josephus and others, as well as other key evidence presented by Dr. Ernest Martin in his acclaimed book, The Temples that Jerusalem Forgot.

Let’s begin again with the accounts of eyewitnesses from the first several centuries.  Writing during the first century AD, Josephus was intimately familiar with the locations and descriptions of Fort Antonia and the Temple of Herod.  Another eyewitness, known in historical literature as the Bordeaux Pilgrim, traveled from Bordeaux (in what later became France) to Jerusalem during the fourth century AD. He recorded his journeys in Itinerarium Burdigalense, and it is there where he wrote of his visit to Jerusalem in AD 333. He is the only eyewitness from the period AD 70 to AD 370 to record the existence of the walls of the Haram esh-Sharif in Jerusalem.

So, what did these two eyewitnesses record relative to the Temple and Fort Antonia? They had much to say. However, their writings have been both forgotten and disregarded by historians and archaeologists, largely because they do not support popular theories.

Let’s look first at the description given by Josephus regarding the location of Fort Antonia. Josephus spoke of a prominent rock associated with the location of the Fort; in fact the most prominent geographical feature associated with Fort Antonia was the rock around which the Fort was built. Josephus mentioned that it dominated other geographical features of the area. Josephus used the Greek word huper to identify the location of Fort Antonia. Rather than indicating that the Fort was built on top of the rock, which would be the Greek word epi, the word used by Josephus indicated that the fortress was built over and around the rock.

In his monumental work, War of the Jews, Josephus recorded the following:

“The tower of Antonia . . . was built upon [around] a rock fifty cubits high [75 feet] and on all sides precipitous . . . the rock was covered from its base upwards with smooth flagstones.“

Before the construction of Fort Antonia, we learn from Josephus’ description that the rock was originally 75 feet high. Herod built four massive retaining walls and filled in the region, covering most of the massive rock and placing smooth flagstones on top of the fill. This created the surface of the Haram esh-Sharif which is evident today. Much later, in the fourth century, Helena, the mother of Constantine, ordered that a small Christian Church called “St. Cyrus and St. John” be built over the rock. This church was enlarged – probably in the fifth century – and became a major church, “The Church of the Holy Wisdom.” What is particularly significant about the location of this church on the Haram is a comment made by another eyewitness, the Piacenza Pilgrim, in the sixth century narrative of his pilgrimage. The comment was reported by John Wilkinson in his book, Jerusalem Pilgrims Before the Crusades (1977), and included by Dr. Martin in his work:

“We also prayed at the Praetorium, where the Lord’s case was heard: what is there now is the basilica of Saint Sophia [the Church of the Holy Wisdom], which is in front [north] of the Temple of Solomon [located] below the street [east and downslope] which runs down to the spring of Siloam outside of Solomon’s porch [the eastern wall of Solomon’s Temple]. In this basilica is the seat where Pilate sat to hear the Lord’s case, and there is also the oblong stone [I emphasize this to identify the spot] which used to be in the center of the Praetorium [the Praetorium tent was movable]. The accused person whose case was being heard was made to mount this stone so that everyone could hear and see him. The Lord mounted it when he was heard by Pilate, and his footprints [italicized for emphasis] are still on it. He had a well-shaped foot, small and delicate.”

As Josephus stated, the “Rock” was the most prominent part of Fort Antonia; and it was also the Praetorium area, which the Piacenza Pilgrim connected to the “oblong stone,” that being the central feature of the “Church of the Holy Wisdom.” As Dr. Martin later reported, The church was destroyed by the Persians and Jewish soldiers in AD 614. The “oblong stone” is now under the Dome of the Rock on the Haram esh-Sharif, the former location of Fort Antonia.

Now, we can return to the statement by the Bordeaux Pilgrim regarding the location of Fort Antonia, as recorded during his visit to Jerusalem in AD 333. He was the first to offer a systematic view of the Jerusalem of his time, although it was not an extensive report. Even so, the Pilgrim’s account is important as additional confirmation of the locations of Fort Antonia and the Temple. From the location of the unfinished Church of the Holy Sepulchre, the Bordeaux Pilgrim viewed a “walled facility” with its foundations within the Tyropoeon Valley. He identified that “walled facility” as the Praetorium and further described it as the former residence of Pilate at the time of Jesus’ trial.

“So, the walled area east of the Holy Sepulchre was an edifice that had remained in existence from the time of Pilate and Jesus. In other words, this structure survived the Roman/Jewish War of 66–70 AD.

“Since we are assured from earlier eyewitness records that nothing of ‘Jewish Jerusalem’ or the Holy Temple (either their inner or outer walls) survived the war, the only candidate that remains to tally with the description of the Bordeaux Pilgrim is the former Fort Antonia – which in the time of Pilate and Jesus had the same technical name – Praetorium – connected to it.

“This shows that the Bordeaux Pilgrim was looking at the broad view of the western side of the Praetorium with its walls (the southern and western walls making the southwestern angle) that we call today the Haram esh-Sharif. It must be emphasized that the Pilgrim observed the Praetorium’s walls (plural) with their foundations that reached downward to the lower areas of the Tyropoeon Valley. His description can only refer to the southwest corner of the Haram ramparts at the junction of the southern and western walls, near what we call ‘Robinson’s Arch’ being directly in front of him.”

Clearly, the Bordeaux Pilgrim of the early fourth century AD was aware that the walls of the Haram were those of the Praetorium, of Fort Antonia, the former Roman camp in the city of Jerusalem.

In conclusion, we now understand that the massive rock located on the Haram – which was buried with fill material and then covered with smooth pavement stones by Herod the Great – plays a prominent role in the historical descriptions of Fort Antonia. But it is not related to the descriptions of the Temples or to the true Temple Mount in Jerusalem.

Note: In my next Post I will include a graphic created by Dr. Ernest Martin to detail the location and layout of the Jewish Temple and Fort Antonia, as reported by eyewitness accounts from the first and fourth centuries.