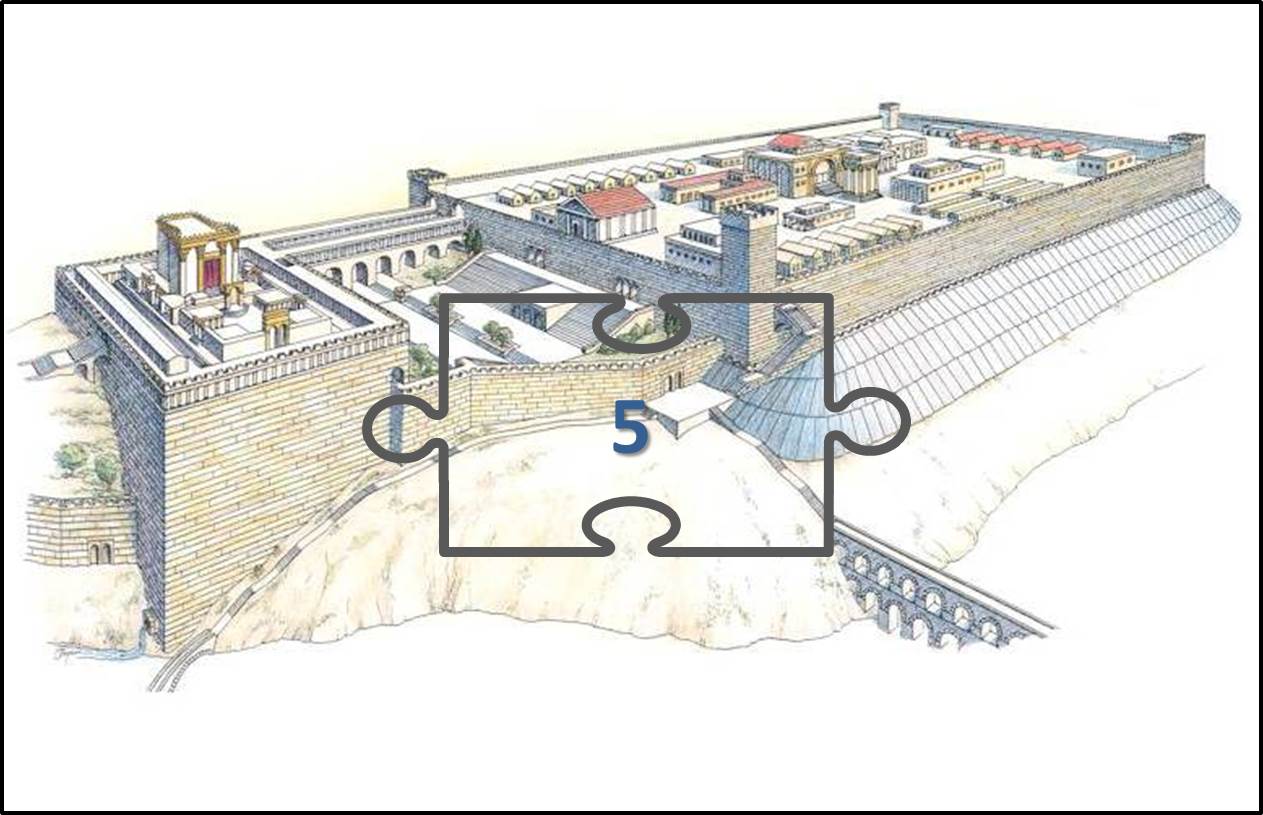 The case being made by Dr. Ernest Martin – which I am inclined to support – is that the Jewish Temples were located over the Gihon Spring, which would place them near the northern foot of the original Mount Zion (the Akra) and just below the Ophel summit in the crescent-shaped original city of Jerusalem.  Certain evidence in support of this has already been presented in my previous Posts, and additional evidence will follow in succeeding Posts.

The fact that the traditional “Temple Mount” is located a third of a mile north of the Gihon Spring and is nowhere near any source of water is strong evidence that this is most likely not the site of the ancient Jewish Temples. In his book, The Temples that Jerusalem Forgot, Dr. Martin made a strong case that the traditional “Temple Mount” – now called the Haram esh-Sharif – was actually the site of the Roman Fort Antonia. As our fifth puzzle piece in this study to find the historically correct location of the Temple of Herod, we will now look more closely at the Haram esh-Sharif.

The case made by Dr. Martin is that Herod reconditioned and enlarged an existing fortress next to the Temple. This fortress was originally called the Baris and was built by the Hasmonean leader and Jewish High Priest John Hyrcanus in about 107 BC. Herod renamed the rebuilt complex after Mark Anthony, the Roman General and Politician .

The massive retaining walls of the Haram – which are present to this day – were built by King Herod using Herodian stones. These stones are easily identifiable even today by their distinctive, raised border design. It is estimated that there are between 8 and 10 thousand Herodian and pre-Herodian stones still in place, just as they were 2,000 years ago. As detailed by Dr. Martin, the western wall has for centuries been incorrectly identified as the western wall of the old Jerusalem Temple and is most often referred to as the “Wailing Wall.” This wall contains seven courses of stones that are clearly visible. In addition, eight courses of Herodian stones lie beneath the current soil level, extending down to the ground level which existed at the time of Herod and Jesus. Finally, nine courses of foundation stones are evident below the second level.

This, then, is a total of 24 courses of stone, which would result in a western wall some 96 feet in height. That is a lot of stone wall still standing.  At this point you may wish to recall Jesus’ prophecy that “. . . not one stone here will be left on another; every one will be thrown down” (Matthew 24:2).

Unlike every other stone wall in Jewish Jerusalem, the walls of the traditional “Temple Mount” remain intact. The question which haunts theologians and archaeologists to this day is this: Why were these walls left standing following the Roman-Jewish War of AD 70 in clear contradiction to the prophecy of Jesus? The answer may be that these specific stone walls were part of something which was either non-Jewish and/or which had potential value to the Romans after the war.

In fact, the extensive Roman military facilities of the Haram – located within the massive retaining walls – were both non-Jewish in nature and certainly of value to the Romans.  These facilities were well-reported in the eyewitness accounts of Josephus and in other historical narratives. Eyewitness accounts are the gold-standard of investigative detective work. Let’s look now at some of those accounts.

First, let me explain briefly the bias against Josephus which many scholars exhibit simply because Josephus’ descriptions of buildings and sites are not compatible with many notions of the present-day. Specifically, his descriptions and detailed dimensions of the Jewish Temple and the site of the Temple do not align with the current notion of the Haram esh-Sharif as the traditional Temple site. This has led many scholars and theologians to discount what Josephus has recorded.

However, given the case being made by Dr. Martin, perhaps it is time to suggest that it was not Josephus who was wrong but, rather, the scholars and theologians who continue to blindly accept tradition as the source of all knowledge.

One scholar who did respect Josephus was Professor Benjamin Mazar (1906-1995). Often described as the “Dean” of biblical archaeologists, Dr. Mazar routinely demonstrated in his writings his appreciation for the accounts of Josephus.  According to Dr. Martin, Dr. Mazar testified to the validity of Josephus’ descriptions at the same time that many modern scholars were roundly criticizing his work.

While the four retaining walls of the Haran remained standing following the destruction of AD 70, Josephus was clear in his reporting that the walls within and surrounding Jerusalem were leveled to the ground. According to Josephus in his critical work, War of the Jews, and as reported by Dr. Martin in his book,

“Now, the Romans set fire to the extreme parts of the city [the suburbs] and burnt them down, and entirely demolished its [Jerusalem’s] walls.”

We must therefore conclude that – since they remained standing – the walls surrounding the Haram were not city walls but walls which protected something else. That “something else” was the Roman fortress, and it was not part of Jewish Jerusalem.

Dr. Martin presents the following scenario to explain the preservation of the walls of the Haram:

“With its walls left intact, the Haram made a perfect complex of buildings, protected by four substantial walls, to be the Camp of the Romans for the Tenth Legion. When Titus viewed the Haram esh-Sharif (Fort Antonia) and saw its walls relatively unscathed (especially its eastern, southern and western walls) and with its 37 cisterns and special aqueduct supplying it with water, he decided to retain that strategic area (with its military advantages) as his Camp for the Tenth Legion. It had been the Roman Camp before the war, and Titus decided to keep it as the Roman Camp after the war. What the Romans did was to permit this former Camp to remain as the principal fort to quarter the Tenth Legion for the security of the Empire. This is why the Haram esh-Sharif was left by Titus to dwell upon the ruins of Jerusalem.

“But what happened to the Temple and its walls? Just as Jesus prophesied, there was not one stone left on another of the Temple buildings or walls. And as Eleazar observed, even the very foundation stones of the Temple and its walls had been completely ‘dug up’ and the site was left in thorough ruins. In a word, nothing was left of the Temple once located just to the south and above the Gihon Spring. All that remained of Jerusalem was the Camp of the Romans (Fort Antonia), the Haram esh-Sharif.”

What other evidence is there to support the case that Fort Antonia was located on the Haram? Perhaps the greatest argument in support of the case – other than the fact that the stone walls remain – is found in the very size of the structure that would be necessary to support the large contingent of soldiers represented by the Roman Tenth Legion.

What specifically can we say about the size of Fort Antonia? First, the size was much larger than most people today can imagine. Second, because scholars have mistakenly identified the large area of the Haram as the site of the Temple, they have had to invent a new location for the Fort and greatly diminish its size in order for the camp to fit into the footprint of the Jerusalem which existed at the time immediately following the Roman-Jewish War.

Scholars attempting to maintain the sanctity of the traditional “Temple Mount” have positioned Fort Antonia just outside the northwest corner of the Haram and have greatly reduced the dimensions reported by Josephus. According to Benjamin Mazar in this book, The Mountain of the Lord (1975), and as reported by Dr. Martin, the Fort was placed over or around a rock pavement found in that area. Of interest is the fact that the pavement area was indeed a Roman camp; however, archaeological investigation has shown that the camp existed during the time of Hadrian, not during the earlier period of King Herod and Pilate. That location – which is shown on virtually all maps and models depicting Jerusalem during the time of Herod and Jesus – does not align either with reality or eyewitness accounts. It must therefore be discounted.

So, how large was Fort Antonia? Josephus wrote in War of the Jews that there were spacious grounds inside the Fort and that it was like a city in size. It housed a legion of troops, which means at least 5,000 men.  There would likely have been an additional 5,000 support personnel to service the legion.

A fort large enough to support 10,000 military personnel would require a massive area.  The Roman fortresses scattered throughout the Roman Empire typically followed the general design of the fortress in Rome. What do we see there? According to Dr. Martin, the Praetorian Camp in the northeastern part of Rome was a square of two stadia on each side (approximately 1,200 feet by 1,200 feet).  Although the Haram was trapezoidal in shape, it was of similar size, but perhaps 15 percent larger than the main military camp in Rome. In all, the Haram encompassed a total of 36 acres.

What else did Josephus state about the massive size of Fort Antonia? According to Josephus, the fortress was so prominent that “Antonia dominated the Temple.” It was large enough to guard the city of Jerusalem, the Temple, and the fortress at King Herod’s former palace, which became the personal residence of General Titus. Josephus described Fort Antonia as being so large that it obstructed the view of the Temple from those approaching Jerusalem from the north. This would certainly have been the case if Fort Antonia occupied the entire area of the Haram; but it would absolutely not have been the case if the Fort represented a small appendage on the northwest corner of the Haram, as depicted in modern models of ancient Jerusalem.

Clearly, the eyewitness observations of Josephus literally shout to us that the popular notions of the Temple of Herod on the Haram and of Fort Antonia as a minor structure at the northwestern corner of the Haram are patently false. Although present-day scholars and archaeologists continue to argue that the ancient Temples were located at the site of the Haram, the arguments simply do not align with eyewitness accounts. This is a major problem. In my opinion, we must now strongly consider that the Temples were not located there.

One final question needs to be asked.  If the massive Fort Antonia was not located on the Haram, then where in Jerusalem could it be located? Remember, it must be located adjacent to the true location of the Temple. There is only one possible answer to the question. Because of its immense size and the lack of another suitable location in Jerusalem adjacent to the true site of the Temple at the Gihon Spring, we must conclude that Fort Antonia was located on the Haram.

Note: In my next Post I will discuss the importance of the rock which is located at the center of what is traditionally known as the “Temple Mount.”