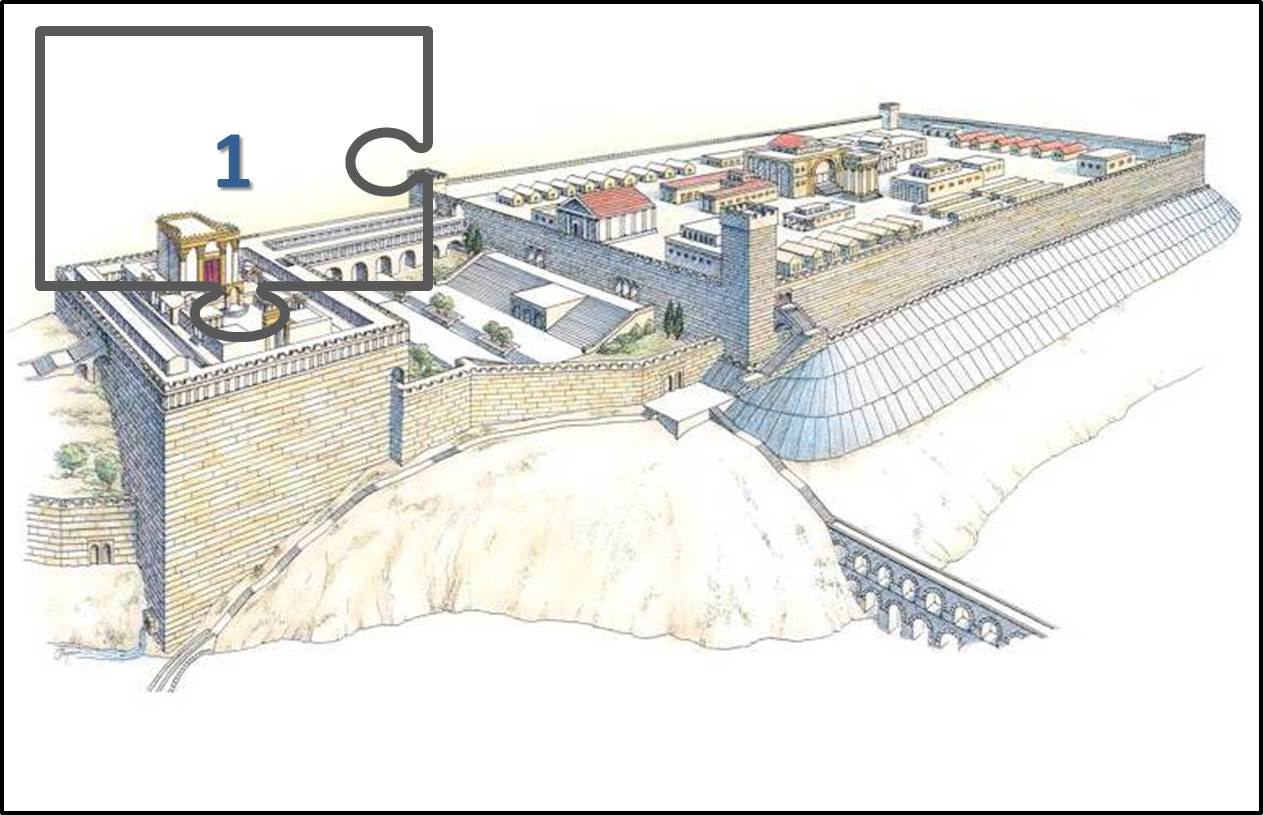 Of critical importance to the determination of the true location of Herod’s Temple during the time of Jesus are Jesus’ own prophetic words regarding what would happen to the Temple and all of Jerusalem because the Jews did not recognize the time of His coming.

An evaluation of this prophecy from Jesus is the first of nine puzzle pieces in my examination of the topic Where Was Herod’s Temple?

Consider the following two passages from the Gospel of Luke:

“For the days shall come upon thee, that thy enemies shall cast a trench about thee, and compass thee round, and keep thee in on every side. And shall lay thee [Jerusalem] even with the ground, and thy children within thee; and they shall not leave in thee one stone upon another; because thou knewest not the time of thy visitation.” (Luke 19:43-44, KJV)

“As some spake of the Temple, how it was adorned with goodly stones and gifts, he [Jesus] said: ‘As for these things which ye behold, the days will come, in which there shall not be left one stone upon another, that shall not be thrown down.’” (Luke 21:5–6, KJV)

We know from the parallel passages in Mark 13:1–3 that Jesus’ prophecy was spoken by Jesus as the disciples and Jesus sat on the Mount of Olives, looking back at the Temple, its retaining walls, and the city of Jerusalem. Just so we are clear: Jesus prophesied that not one stone would be left on another, with respect to either the City of Jerusalem and its walls, or the Temple and its walls. This is stated in a total of four passages in three of the Gospel accounts – the two passages of Luke, the passage at Matthew 24:1-2, and then again in Mark 13:1-3. Clearly, Jesus meant what he said; and each of the Gospel accounts confirms this.

Jesus’ prophecy for total destruction occurred during and after the Roman/Jewish war of AD 66-73. Josephus recorded the destruction of the Temple and the buildings of Jewish Jerusalem in this seminal historical accounting War of the Jews, Book VII (78 CE); and his words are further reported by Dr. Ernest Martin in his book, The Temples That Jerusalem Forgot (2000):

“. . . Caesar gave orders that they should now demolish the entire city and Temple . . . but for all the rest of the wall [surrounding Jerusalem], it was so thoroughly laid even with the ground by those that dug it up to the foundation, that there was left nothing to make those that came thither believe it [Jerusalem] had ever been inhabited. This was the end which Jerusalem came to by the madness of those that were for innovations; a city otherwise of great magnificence, and of mighty fame among all mankind.”

If we were to stand on the Mount of Olives today and look westward toward the city of Jerusalem, what would we see? Most notable would be the gigantic walls of what is presently called the “Temple Mount” (the Muslim Haram esh-Sharif). As reported by Dr. Martin, these walls still reflect their original glory, with some 10,000 Herodian and pre-Herodian stones still in place in their lower courses. If these stones represent the retaining walls of the Temple and its buildings, then either Titus failed to completely destroy Jerusalem, or Jesus erred in His explicit prophecy.

So, why do these walls now exist? The answer given by most scholars who are conciliatory to Christian principles is that Jesus meant that only the stones of the inner Temple and its buildings would be torn down, not the outer Temple and its surrounding walls. This is simply not true! The exterior building of the Temple, including its walls, were always reckoned within the meaning of “Temple,” as used by Jesus. Note that in the Matthew 4:5 account of Satan taking Jesus to the “pinnacle of the Temple,” this pinnacle was the southeastern corner of the outer retaining wall that surrounded the whole of the Temple complex. As Dr. Martin explains it:

“The wording in the New Testament shows that this southeastern angle was very much a part of the Temple – it was a pinnacle [a wing] ‘of the Temple.’ That area was a cardinal attachment to the sacred edifice itself and an integral section of the Temple Jesus referred to when he prophesied that not one stone would remain on another.”

Another important consideration in understanding Jesus’ prophecy concerned the location of His teaching on the Mount of Olives and the view He had back to the west, toward the Temple and Jerusalem. Dr. Martin offers the following commentary:

“Another important geographical factor proves this point. When Jesus made his prophecy [about the temple destruction], Matthew said that Jesus and his disciples just departed from the outer precincts of the Temple. This means all of them were viewing the exterior sections of the Temple and its walls (the heiron [Gk.]) when he gave his prophecy (Matthew 24:1). The Gospel of Mark [Mark 13:1-2] goes further and makes it clear the outside walls of the Temple were very much in Jesus’ mind when he said they would be uprooted from their foundations. ‘And as he [Jesus] went out of the Temple’ [note that Jesus and the disciples were standing outside the Temple walls and looking back toward the Temple enclosure].”

Without a doubt, when Jesus spoke in his prophecy about the destruction of the Temple, he absolutely included the stones of the outer walls enclosing the Temple, as well as the buildings of the inner Temple.

Clearly, everything hinges on what Jesus meant in His prophecy about the Temple and Jerusalem. If we are willing to cast aside tradition and any preconceived notions, then we must accept that Jesus’ prophecy was meant to include the Temple and all the walls, including the outer retaining walls of the Temple complex. In my mind, there is really no ambiguity in what Jesus said or what he meant.

We must therefore conclude that Jesus’ prophecies about the Temple and the city of Jerusalem either happened exactly as Jesus predicted, or those prophecies must be reckoned as false.  It really is as simple as that. Since we see the outer retaining walls of the traditional “Temple Mount” still standing, we must conclude that the “Temple Mount” is not the location of the Temple which stood at the time of Jesus. This is an extremely important part of the case which Dr. Martin presented, and I find it quite convincing.

Those scholars who hold firmly to the belief that the traditional “Temple Mount” is the actual site of the Temple must somehow ignore the reality regarding the outer retaining walls of the Temple complex, which were clearly part of Jesus’ prophecy. In my humble opinion, this is a stained view and smacks of eisegesis – a reading into Scripture – rather than exegesis – a reading out of Scripture – which should always be the goal during a study of scripture.

I believe I can state with certainty that if Jesus intended to include the retaining walls of the Temple in his prophecy – which I believe He did – then clearly the traditional “Temple Mount” cannot be the site of the Temple that existed at the time of Jesus.

In the next several Posts I will look at some of the other evidence which Dr. Martin presented in his landmark book, The Temples That Jerusalem Forgot.

Note: In my next Post, I provide evidence from the accounts of eyewitnesses to the destruction of Jerusalem and the Temple.