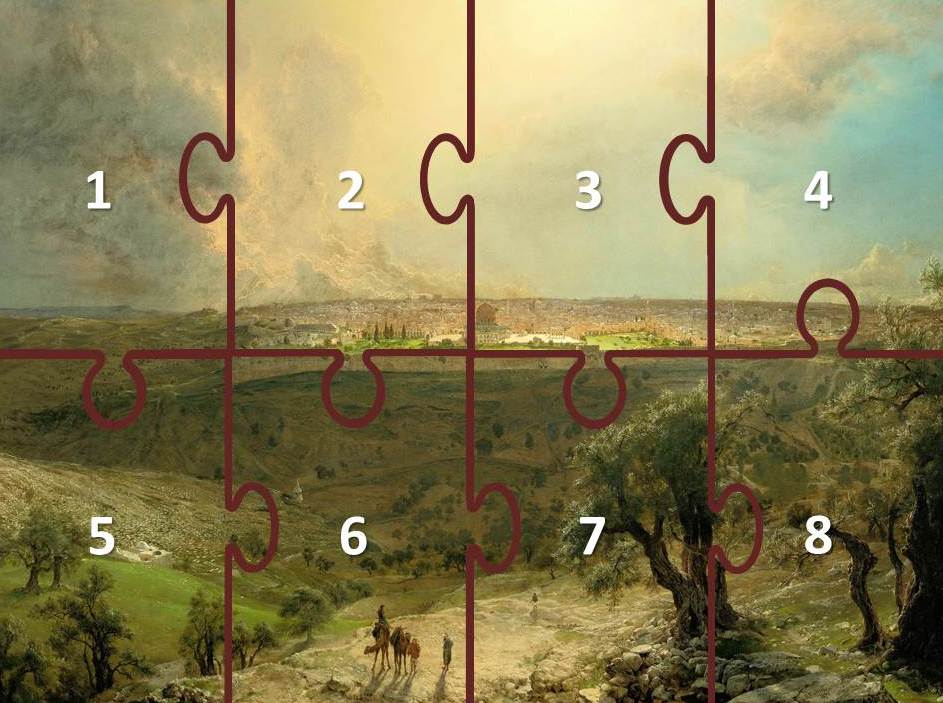 I have now examined the evidence representing eight different puzzle pieces in my topic Where Were Jesus’ Death, Resurrection, and Ascensions and believe the evidence strongly supports that Jesus was crucified and buried on the Mount of Olives, rather than at one of several more traditional sites elsewhere in and around Jerusalem. The primary evidence for my case is found in the Biblical account of the crucifixion in the Gospel of Matthew, in the records of first century historians, and in certain extra-biblical writings.

In this presentation I have evaluated eight different puzzle pieces, and through each I have sought to expose the problems posed by traditional thinking regarding the events that occurred at the end of Christ’s life.  For centuries, the church has maintained the traditions regarding the crucifixion, burial, resurrection, and ascension of Jesus without properly considering that these traditions were based on hearsay, misinformation, and pure speculation. Hopefully, I have been able to set some of that straight.

In searching for truth, I have wrestled with how the puzzle pieces fit. I believe the puzzle is now complete, ultimately assembled by examining critical pieces of information related to the following:

* The problems associated with the traditionally-accepted locations for the crucifixion

* Scriptural support for a new crucifixion location, based upon the account in Matthew, in which the Centurion and others witness the tearing of the curtain in the Temple – something which would only have been possible from the Mount of Olives

* The alignment of the Gospel accounts with the Mount of Olives

* The correlation of the sacrifice of the Red Heifer on the Mount of Olives with the sacrificial death of the Messiah – as recorded in Scripture, Jewish literature, and early Christian writings

* The understanding that the official area designated for executions was east of the temple, on the Mount of Olives

* The understanding that at the time of Jesus, executions were only performed outside the camp, at least 2,000 cubits from the Temple location of the Sanhedrin

It should be noted that if the crucifixion of Christ occurred on the Mount of Olives – as I believe this study has proven – then the Via Dolorosa (the Way of the Cross) must run to the east from Jerusalem, across the Kidron Valley, and on to the Mount of Olives – and not along the traditional path through Old Jerusalem. This might be difficult for some to accept. Furthermore, if my case is accurate – and I believe it is – then the following activities associated with the final week of Jesus’ life and of his eventual Second Coming are all to be associated with the Mount of Olives:

Virtually all present-day historians and archaeologists believe that Herod’s Temple was located on the site of the traditional “Temple Mount.”  This, then, would have placed the crucifixion, burial, and resurrection sites of Jesus close to the southern summit of the ridge on the Mount of Olives. According to Nancy Kuehl in her excellent book, A Book of Evidence – The Trials and Execution of Jesus (2013), there is historical evidence that this site east of the Temple on the Mount of Olives was also the location of Beth Pagi, an area situated at the intersection of the path from Bethphage and the Jericho Road. Beth Pagi served as an extension of Temple administration and was the place designated by Temple officials for the execution of Jewish criminals.

Dr. Ernest Martin made a case for a different southern location in his book, The Temples that Jerusalem Forgot (2000).  According to Dr. Martin, the more likely location of the crucifixion site would have been on the southern spur of the Mount of Olives, somewhat south of the southern summit. This southern spur of Olivet would have been what is referenced in I Kings 11:7 as the place where Solomon sinfully built a high place for Chemosh, the detestable god of Moab and Molech. The author of the Book of Enoch referred to this area of the Mount of Olives as “. . . the Mount of Offense, eastward from Zion across the Kedron Valley . . . “  Although not part of the Holy Scriptures, Enoch is referenced favorably in the New Testament Book of Jude.  It was written near the time of Simon the Hasmonean (Second Century BC).

In II Kings 23:13, the southern spur of Olivet – the “Mount of Offense” – is referred to as the “Hill of Corruption.” The passage from II Kings states: “And the high places that were before Jerusalem [that is, east of Jerusalem], which were on the RIGHT HAND [southern part of Olivet] on the Hill of Corruption . . .” Dr. Martin believes this is likely the area where Jesus was crucified, directly east of the southernmost Temple location.

In my upcoming series of Posts, Where was Herod’s Temple?, I look more closely at the details of the Temple location and present the case espoused by Dr. Martin that the Temple was located over the Gihon Spring in the original City of David.  As we will see, the case is highly controversial. For example, in his book, The Temples that Jerusalem Forgot, Dr. Martin references a topographical map from the late 1800’s from which he supports his position regarding the original location of the Jewish Temple.  According to Dr. Martin, up until the time of Simon the Hasmonean, a crescent-shaped southeastern ridge defined the limits of the city of Jerusalem. Dr. Martin’s proposed location for the Temple was in the original Mount Zion area of the former City of David, within this crescent ridge.

Regardless the location of the Temple – whether on the traditional “Temple Mount” or at the more southern location – Dr. Martin makes the case in his book, Secrets of Golgotha – The Lost History of Jesus’ Crucifixion (Second Edition), that Jesus was buried and subsequently resurrected at a cave at the site of the Pater Nostra Church, at the summit of the southern hill of the Olivet ridge.

However, I have several problems with this proposed location for the burial of Jesus. The first problem is that the Pater Nostra Church is located very near the southern summit of the ridge on the Mount of Olives. This burial location would not have been in close proximity to Martin’s proposed crucifixion site on the southern spur of the Olivet ridge, a distance of several thousand feet from the Pater Nostra Church location. Close proximity of the tomb to the crucifixion site is a requirement from the gospel account of John:

“At the place where Jesus was crucified, there was a garden, and in the garden a new tomb, in which no one had ever been laid. Because it was the Jewish day of Preparation and since the tomb was nearby, they laid Jesus there.” (John 19:41–42,)

The second problem arises from the fact that we know from scripture (John 19:38-40) that Jesus’ body was claimed by Joseph of Arimathea and Nicodemus.  No others are mentioned.  It would be unreasonable to presume that these two men could transport the body of Jesus several thousand feet up the Mount of Olives to the supposed burial site at the Pater Nostra and somehow accomplish this feat prior to sunset on the day of crucifixion.  The effort fails both the test of scripture (proximity burial) and the test of logic (time and distance).

If the crucifixion were on the southern spur of the Olivet ridge – as Dr. Martin proposed – the tomb of Jesus would most likely have been in the same vicinity. In support of this position, I have included the figure below, which depicts the route of the Bethany-Jericho road crossing the southern spur of Olivet. In my mind, this location would be more in keeping with both Scripture and Dr. Martin’s proposed crucifixion site. 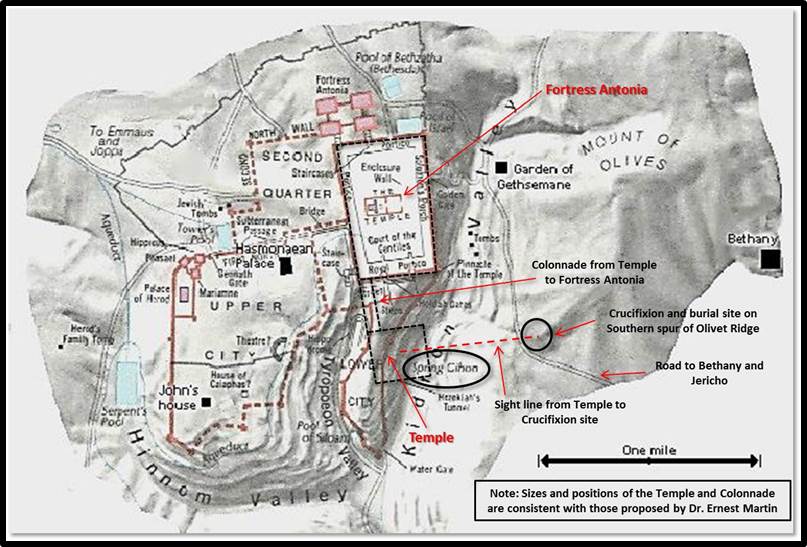 In short, the vast majority of present-day theologians and religious archaeologists believe that the Temple during the time of Jesus was located on the traditional “Temple Mount.” Still, there is a small – but growing – number of scholars who now argue that the Temple was actually located 900 feet south of the southern wall of the Haram, within the ancient City of David in the “Mount Zion” area of Jerusalem, above where the Gihon Spring is still located today.  This is the position advocated by Dr. Martin and the one which I will explore in more detail in multiple upcoming Posts.

With all of the controversy surrounding the death, burial resurrection, and ascensions of Jesus – and now including the latest controversy involving the true location of the Jewish Temples – it is as if God has placed a veil over the eyes of mankind regarding these things. As you continue to explore these Posts with me, you will come to appreciate even more why I believe it is so important to study scripture, research reliable history, and critically evaluate religious writings in an effort to “lift the veil” – so that we might behold the truth, with eyes wide open.

But even as we do what we can, some things God will reveal in His own perfect time.

Note: In my next Post, I begin a new topical study in which I investigate the controversial subject “How Did Jesus Really Die?”