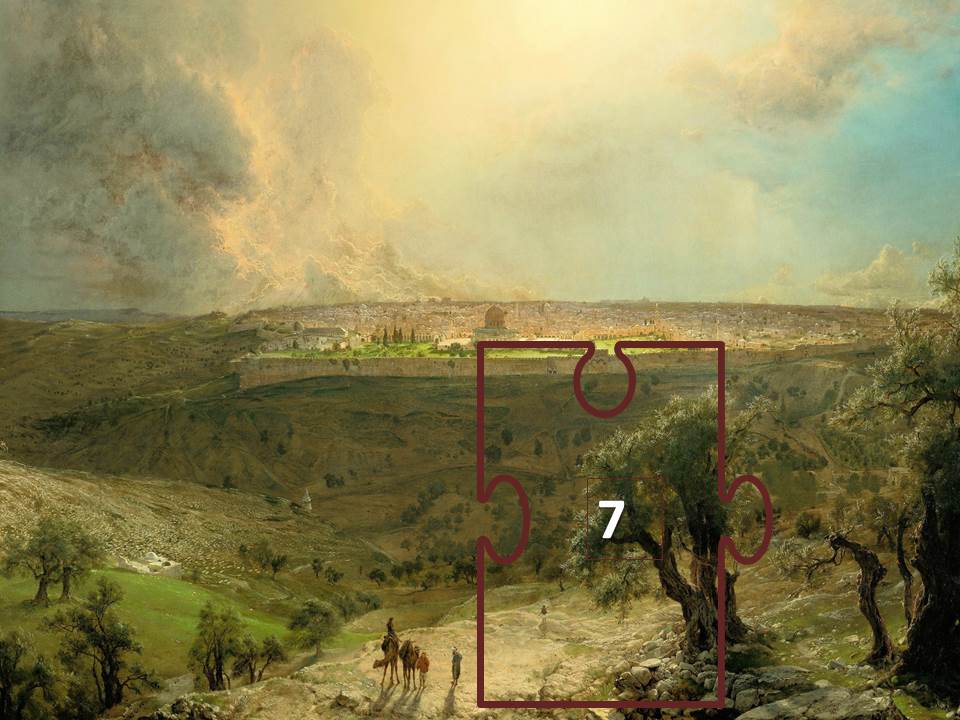 Our seventh puzzle piece in this topic area regarding the death and resurrection of Jesus involves a Pattern of West-to-East Movement from Jerusalem toward the Mount of Olives. This involves an interesting observation from Scripture, and it helps to make our case for the crucifixion of Christ having been on the Mount of Olives.

As James Tabor has stated, “The basic case for the Mt. of Olives being the site of Jesus’ crucifixion rests on several interrelated arguments of varying evidential strength.”

This issue of movement which I am about to discuss might arguably be considered among the least of the arguments in a ranking of evidential strength offered in this case. However, I consider it to be yet another link in the chain of corroboration for the crucifixion being on the Mount of Olives. That alone makes it worthy of discussion.

As I will illustrate, what we see is that there is a definite correlation of West-to-East movement from Jerusalem having a negative connotation; and we find just the opposite for East-to-West movement toward Jerusalem, which seems to have a positive connotation. The Biblical evidence is quite remarkable.

In general, Scripture seems to bear out that the movement of people or objects – or the occurrence of activities or events – which result in a departure from Jerusalem from a Westerly direction and movement to the East, seems to have had a negative connotation or consequence.  Note that the term “negative” could in some cases be a matter of interpretation and did not necessarily mean something that was bad, evil, or detrimental.

The following are some specific examples from Scripture:

* The Red Heifer was led from the Temple to the Mount of Olives to be sacrificed.

* The Scapegoat was led to the Mount of Olives and Eastward into the wilderness.

* Jesus went to Gethsemane on the Mount of Olives – following the Passover meal with his disciples in Jerusalem – to pray and cry out to the Father before His arrest and crucifixion.

* Jesus was led to His death on the Cross.

In contrast to the West-to-East movement examples cited above, examples from Scripture of the East-to-West movement of people, objects, activities or events generally seem to have had a relatively “positive” connotation or consequence. Again, the term “positive” may be subject to interpretation.

The following are some specific examples from Scripture:

* Ashes of the Red Heifer are brought from the Mount of Olives to the Temple for use in the purification of the Temple, the Temple instruments, and the people.

* Jesus’ triumphal entry into Jerusalem is initiated from the Mount of Olives.

* Resurrected Old Testament saints entered Jerusalem from the Mount of Olives following the resurrection of Jesus (Matthew 27:52–53), as part of the First Fruits of the resurrection.

* During the Last Days, the God of Israel will come in His glory from the East – the Lord will enter the Temple of Jerusalem through the gate which faces East (Ezekiel 43:2, 4).

Again, I realize that this small piece of the puzzle – which in any case is subject to interpretation – pales in comparison to the more concrete arguments I have made in previous Posts.  Still – and as I indicated earlier – I believe there is merit in presenting all of the evidence and then allowing each individual to determine which pieces form the most complete picture.

That said, I believe that even this pattern of movement from Jerusalem West-to-East toward the Mount of Olives fits a scheme in God’s greater plan and therefore supports the crucifixion of Jesus being on the Mount of Olives. This pattern is the same as we see with both the sacrifice of the Red Heifer and the ceremony of the Scapegoat during the annual Day of Atonement Feast. These correlations – these patterns – do not exist with either of the two traditional crucifixion sites.

Note: In my next Post, I will introduce evidence which some may find highly controversial.  This evidence has to do with the actual location of the Temple in Jerusalem, which – as we now know – is critical, because it must be situated in such a way as to be visible from the crucifixion site on the Mount of Olives to the east of the Temple, as this is the only way that the Scriptural account of Jesus’ crucifixion could be fulfilled. I present Scriptural and historical evidence that the traditional northern site of the Second Temple on the so-called “Temple Mount” may, in fact, be in error.  And because this topic is so critical, I devote an entire topic to it, with no fewer than 12 separate Posts.  Read about it in the topic “Where Was Herod’s Temple?”