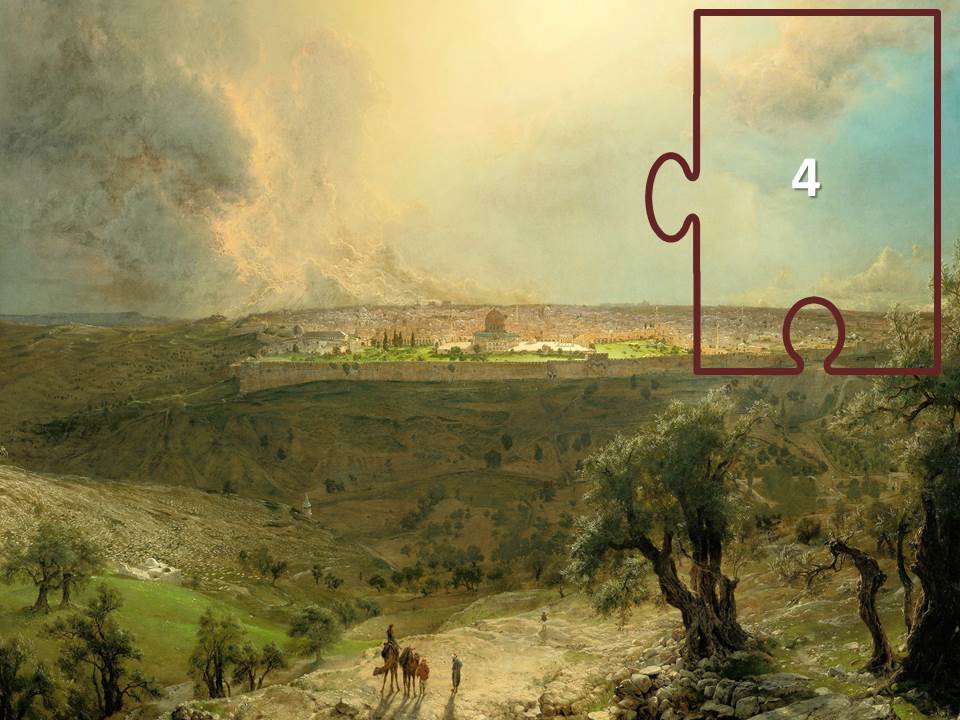 This is the fourth of eight puzzle pieces in our quest to determine “Where were Jesus’ Death and Resurrection?”

In his website article, “The Place of Jesus’ Crucifixion,” James Tabor makes the following statement regarding the Roman preference for the Mount of Olives for crucifixions:

“Josephus says that during the Jewish revolt (66–70 AD) thousands of Jewish victims were crucified ‘before the wall of the city,’ in order to terrorize the population. This description fits perfectly with the Mt. of Olives, before the main city gate, with the Romans camped just to the north on Mt. Scopus. This was the only location that could be seen by anyone in the city of Jerusalem, thus providing a visible warning to those who might be tempted to sympathize with rebels.”

Dr. Ernest Martin states that the region of Jerusalem considered by Jewish authorities to be the official site for executions was the eastern area. This area was also symbolic as the location from which they considered the whole world would one day be judged by God. According to Dr. Martin:

“The authorized place of execution for criminals in the time of Jesus had to be east of the Temple Mount, but it had to be in a place where the condemned could see the entrances to the Temple located in a westward direction. The biblical examples for judicial sentencing of people for their criminal acts in the time of Moses show they took place on the east side of the Sanctuary. Women accused of adultery were brought for judgment ‘before the Lord’, that is, to the east entrance of the Sanctuary (Numbers 5:16–31). The two sons of Aaron were judged ‘before the Lord’ on the east side of the Sanctuary (Leviticus 10:1–7). Korah and his Levites were also punished east of the Tabernacle (Numbers 16:41–50).

“It was important for official judgments to be rendered and executed east of the Temple. This allowed the judgments to be made ‘in the presence of God,’ who figuratively faced east from his Sanctuary. Because of this, both the Sanhedrin and the lesser courts at Jerusalem in the time of Jesus were located in the Temple to the east of the Holy Place (Cohen, Everyman’s Talmud, 299) (sic). It was reckoned that while God was symbolically sitting in the Holy of Holies, he could watch the proceedings going on in the law courts. God supposedly faced east while sitting on his Temple throne. Thus God in a figurative way had a panoramic view of all the ritualistic and judicial duties of his people which were being conducted east of the Sanctuary. This allowed all ceremonies (both religious and secular) to be done ‘in the presence of God.’”

In short, we find that the eastern location was specified for judicial matters involving capital crimes. As the preferred execution site from both the Roman and Jewish perspectives – for different reasons – the Mount of Olives was clearly favored over the more historically traditional sites to the north or west of the Temple Mount (or any other proposed non-eastern site).

Note: In my next Post, I will investigate the Jewish requirement that executions be “outside the camp.”  This will be our fifth of eight puzzle pieces in this topic series.