More Than One Passover

It may surprise you to learn that in first century Judaism there were five Jewish sects which observed “Passover,” each with distinct days for the sacrifice of their lambs.  These Passovers were the Mosaic Passover, the Samaritan’s Passover, the Essene’s Passover, the Sadducees’ Passover, and the Pharisaic Passover. Which one did Jesus observe in his Passover seder (the “Last Supper”) and through his sacrificial death? This is another of the mysteries which I am examining and which many researchers fail to consider.

That there were several “Passovers” is the first puzzle piece in our quest to determine the true day of Jesus’ death.

The first Passover (Heb. Pesach) was, of course, in Egypt under the direction of Moses (the “Mosaic Passover”). It involved the passing-over of the Angel of Death for those households which were protected by the blood of the lamb on the door frames of the houses. Those which did not have the blood applied to the door frame of the house, as God instructed, incurred the death of the firstborn of the family. We can see this as part of God’s plan of redemption of mankind, with the original Passover modeling the redemption to come through the Messiah and His shed blood on the cross. Jesus came at the appointed time as the Passover Lamb of God almost 1,500 years following the model of the original Passover in Egypt. We therefore need to understand the chronology of that original Passover and apply it to the chronology of the death of Jesus.

When was the date on the Jewish calendar of the original Passover? This is clearly stated in Leviticus 23:5–7:

“In the first month [Nisan/Abib], on the fourteenth day of the month [Nisan 14] at twilight is the Lord’s Passover.”

This date is reiterated in Exodus 12:6 and again in Numbers 9:1–5, 28:16. It was essential for Jesus, as the Messiah, to die and resurrect on the exact days revealed to Moses at Mount Sinai.

According to Avi Ben Mordechai, the difference between the two interpretations determines when the Passover lamb is killed and when it is eaten. From ancient Jewish sources, we know that the Sadducees and the Samaritans (on Mount Gerizim) sacrificed their lambs on Aviv 13/14, 24-hours before the Pharisees on Aviv 14/15. In addition, according to the Gospel accounts, the disciples of Jesus killed the Passover lamb for Jesus and the disciples – which was registered to Jesus and the disciples according to Jewish law – on Nisan 12 (late Tuesday) and ate it that Tuesday night (after the start of the Jewish day of Nisan 13) as part of Jesus’ Passover seder (the “Last Supper”). Ben Mordechai describes the entire process as follows:

Here, in the mid-afternoon of Aviv 12 (Tuesday), Y’shua [Jesus] instructs his talmidim [disciples] to sacrifice the Pesach [Passover lamb] in the Temple. Then, they went to prepare it and eat it with unleavened bread that evening [after start of Nisan 13]. In order for Y’shua [Jesus] to be the lamb, according to the Mosaic covenant, He had to eat the lamb a day earlier, which one could do so long as there was no leaven in the home.

. . . The meal [John 13:1] according to the sequence of events presented is Tuesday night, Aviv 13, before Y’shua’s [Jesus’] crucifixion, set to occur late the next day (Wednesday), still Aviv 13, as it was giving way to Aviv 14 at sunset.

. . . On the third day of the week (Tuesday), Aviv 12, He ordered the sacrifice of a Pesach lamb and told His talmidim [disciples] to roast it and prepare it for their final meal with Him that night. These words alone could prove that Y’shua [Jesus] died on the fourth day of the week (Wednesday) because He referred to the ‘preparation day’ 24-hours before His own sacrifice and not to the Pharisaic ‘preparation day’ which was to begin after midday on the day of His crucifixion. . . . following Tuesday’s sunset as Aviv 12 turned to Aviv 13 . . . He celebrated His final meal with His talmidim [disciples].

The following image depicts the Crucifixion week during the month of Nisan in AD 30. 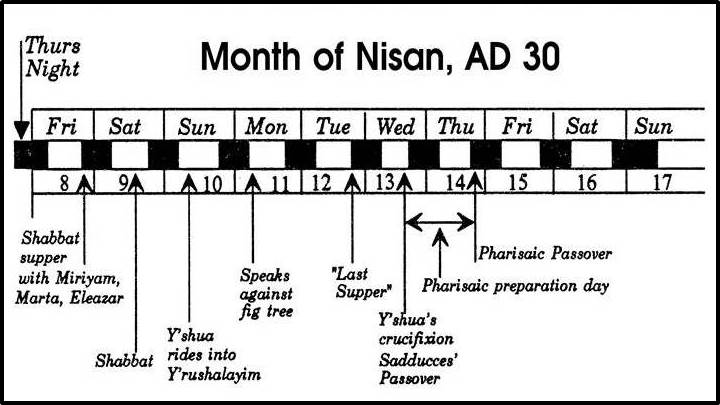 . . . Y’shua [Jesus] died according to the written Torah on the Mosaic Pesach, Aviv 13/14 (late Wednesday afternoon); the narrative [John 19:31] is therefore referring to the Pharisaic day of preparation, also Aviv 13/14.

These quotations from Ben Mordechai provide us with a sense for the complications which arise from the Passovers practiced by the different sects of Judaism (Sadducees and Pharisees) during the crucifixion week. Basically, Jesus and His disciples ate the Mosaic Passover lamb together on Tuesday night, Aviv 12; and Jesus then became the Passover Lamb and sacrificial lamb of the Sadducees (who controlled Temple services per the Torah) on late Wednesday afternoon of Aviv 13/14, at “twilight” (“between the evenings”).

The following image depicts the Mosaic and Pharisaic Passovers during the Crucifixion week.

Each of the Passovers of the various sects of Judaism had their own distinctive Day of Preparation prior to the day of Unleavened Bread (a High Sabbath day), which further complicates the proper interpretation of the Gospel accounts. Additionally, there is the complication of the Preparation Day occurring the day before the regular weekly Sabbath of the seventh day (Saturday).

In arriving at my conclusion that Jesus was crucified on the Wednesday of crucifixion week in AD 30, I considered all aspects of the different Passovers of the various sects of Judaism.  My conclusion is that  Jesus followed the Passover chronology during the crucifixion week set forth by God through Moses and as recorded in the Torah (Old Testament Scripture). This is the first piece of the puzzle in our quest to determine the actual date of Jesus’ death.

Note: In my next Post I will discuss the second of the eleven “puzzle pieces” for the topic of Jesus’ Death, Resurrection and Ascensions.  This “piece” deals with Hebrew timing issues regarding the Passover.