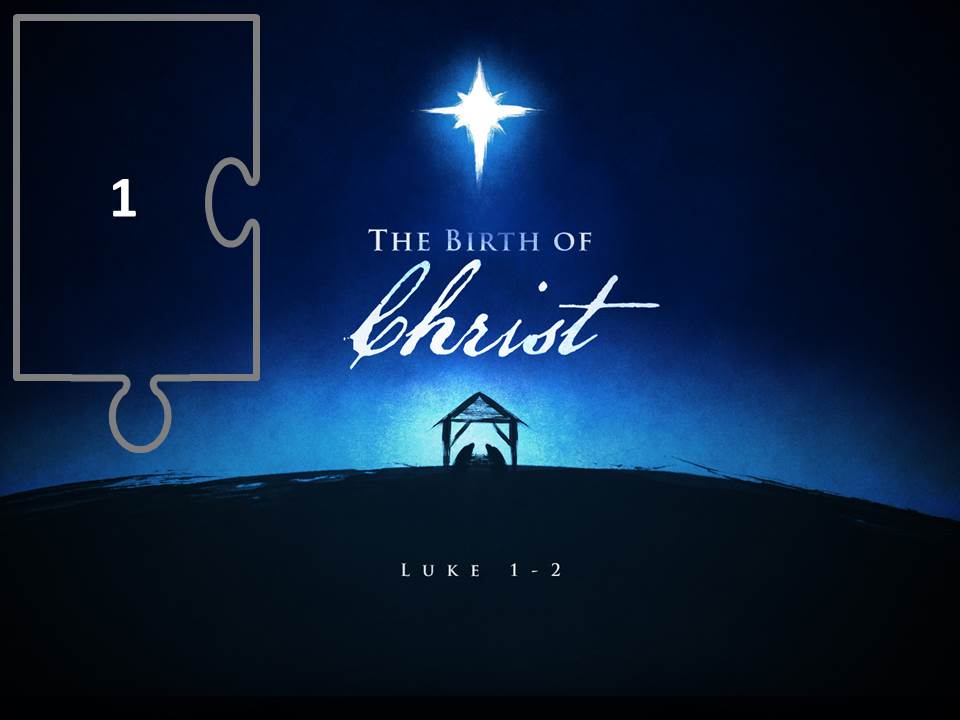 When considering the birth date of Jesus, it is easy to eliminate any proposed date that does not occur in the fall of the year. Although some have speculated that Jesus was born in the springtime – even during Passover – a birthdate in the spring is not reasonable, due principally to the biblical method of calculating the month of Jesus’ birth.

The biblical method of calculating the birthday of Jesus involves figuring the birthdate of John the Baptist and then applying other information in Luke’s Gospel regarding the time difference between their births. This clearly places Jesus’ birthdate in the fall of the year.

The Gospel of Luke covers the birth of John the Baptist before giving details of the birth of Jesus. There is a reason for this: The two are inseparably linked in the chronology of their births as well as in their ministries.

Determining the birth date of John the Baptist is the first puzzle piece in our process of assembling the “puzzle” of Jesus’ birth.

Luke provides clues related to John the Baptist’s father, Zechariah the priest, which help us unlock the date for the birth of Jesus. This requires some biblical “sleuthing” to derive the months and days of the year for the births of John and Jesus. Some important information from the Old Testament and from the Jewish Mishnah are also needed to calculate John’s birthdate – the initial step in figuring Jesus’ birthday.

In Luke we read:

“In the time of Herod king of Judea there was a priest named Zechariah, who belonged to the priestly division of Abijah; . . .”  Luke 1:5 (NIV)

This is an important clue, as the priestly division of Abijah was the eighth of the 24 divisions which King David, on God’s instructions, had set up to service the Temple (1 Chronicles 24:1-19; 28:12-13). King David had divided the descendants of the sons of Eleazar and Ithamar, the two sons of Aaron, into 24 groups (courses) and set up a schedule for the priests (Kohanim) to service the Temple in an orderly manner throughout the year. Each course served for one week (2 Chr. 23:8, 1 Chr. 9:25), from Sabbath to Sabbath, twice a year. In addition, according to the Jewish Mishnah all courses served together during the three Pilgrim Feasts (Unleavened Bread, Pentecost, and Tabernacles). Each course therefore served for a total of five weeks during a normal year.

Calculated Dates for the Births of John the Baptist and Jesus

In 4 BC (Jesus’ birth is assumed to be in 3 BC from other historical evidence as well as astronomical evidence – to be presented in future Posts), Nisan 1 was the equivalent of our March 29, and the preceding Sabbath was March 24, making the week of the duties of the first priestly course from Sabbath noon, March 24, to Sabbath noon, March 31 (and the 2nd course from March 31 to April 7, etc.). The 3rd course (which started on our April 7) was interrupted by the Passover/Unleavened Bread week-long celebration, when all the priests officiated together; and this caused the 3rd course to extend its service until the Sabbath after Passover, which was April 21 in 4 BC.

The period of service for the 8th course of Abijah, to which Zechariah belonged, was from May 19 to May 26. It was most likely this late spring administration when Zechariah’s service was interrupted by the angel’s appearance to him, announcing his wife’s imminent pregnancy. Because of his unbelief, he was struck dumb during his service in the Temple, which immediately disqualified him from his priestly duties (Lev. 21:16-23). Therefore, he left for home.  Sometime between May 26 and June 1, Elizabeth would have conceived. She later gave birth to John the Baptist near March 10 in 3 BC (after the gestation period of 9 months and 10 days, a total of 280 days). This would place the birth of Jesus six months later (Luke 1:26-38) in the first half of September, in 3 BC.

Of course, the other possibility is that the date that the angel struck Zechariah and caused him to lose his speech was during Zechariah’s second service term in the second half of the year, rather than during the first term of service in the spring. However, this is unlikely, as it would have caused the birth of John the Baptist to be near mid-September. Consequently, Jesus’ birth would have been in March, during the rainy season. William Ramsay demonstrates in his book, Born in Bethlehem, that the general time of year for the start of the census was from August to October – to encourage higher participation – and not during the rainy season in mid-March. We therefore know that Jesus was most probably not born in the spring, since we know that Joseph was taking his family to Bethlehem for the census, at which time Jesus was born. And we then conclude that Zechariah’s service in the temple when he was struck dumb was during the first half of the year rather than during the second half.

From this method of calculating the birthdate of Jesus from information related to the birthdate of John the Baptist in Luke’s Gospel – as well as from information on the timing of the Roman census – we see that Jesus was most likely born in the fall of the year, probably in September. It is admittedly impossible to arrive at a specific date for the birth of either John the Baptist or Jesus based on the priestly courses and the information in Luke’s Gospel, but it helps to approximate a likely range of dates.

Tishri 1 (Yom Teruah, the Feast of Trumpets) began at sundown on September 11, 3 BC, when the day changed from Elul 30 to Tishri 1. In my next Post I will present both astronomical/zodiac evidence and a scriptural reference from Rev. 12:1-6 to “prove” that Jesus was born on September 11, 3 BC, when the astronomical signs in Revelation aligned precisely and uniquely with this specific date. Establishing the birth date of Jesus from the birth date of John the Baptist and doing so by use of precise astronomical evidence therefore appear to be in agreement. All this is building a case for the correct date of the birth of Jesus.

Note: In my next Post I will discuss the evidence for Jesus’ birth as supported by specific astronomical references in Scripture.